These are the words, in the Greek, that Luke (1:26-38) gives to the angel Gabriel who approaches Mary and tells her of God's plan for her. The most frequent translation I have found for these words has the angel saying to this young woman, Mary, "Hail, full of grace". Other translations of the Bible have translated this as "favored one" (NAS) and "you who are highly favored" (NIV). As a Catholic I prefer the familiarity of "full of grace". Whatever Bible translation you like best, the importance of that greeting, as well as the blessed state of Mary, seems obvious from the greeting.

But it is the moment coming from the next phrase that I connected with and recognized as relating to this track:

"Mary was greatly troubled at his words, and wondered what kind of greeting this might be."(Luke 1:29, NIV).

The fear of being alone and approached by a man (presuming the angel named Gabriel would have the appearance of a male), not to mention a man who probably had some supernatural appearance. What fear this young girl must have experienced. And then, when he speaks and refers to her as being "full of grace"! Is it any wonder she would be troubled? Confused? Scared? Perhaps glancing around to see if someone might be coming to rescue her. Perhaps wanting to run and choosing not to. It is not hard to imagine the emotions she may have felt as she heard his words. There is a short section about midway in the piece where, if you close your eyes and listen carefully, in the voices of the strings you can almost hear Gabriel and Mary speak to one another.

Dealing with fear is a frequent theme in the New Testament. Jesus tells many to "be not afraid" in one variation of the phrase or another. It is also easy to imagine normal, hard working people being thrust into the arena of this supernatural activity and experiencing a fearful reaction. It is easy to imagine Mary, undoubtedly alone at the moment of the appearance of Gabriel, being terrified. She was a real girl, with no advance knowledge of how this story would end. For her it was unfolding moment by moment.

Three of the four tracks on this release glance over to a very human Mary at a time when fear or doubt surfaces. We know how she dealt with it, at least to some extent. But in the moments alone at night. Before sleep, or as sleep beckoned. Her courage was probably challenged in some of these moments. And the example she gave us can show us all the way to live with God.

"Caire, kecaritomene" was written last, but falls first in the sequence of the four tracks. It was written on 8/22/06, with some additional work taking place on 9/13. The track was titled and converted to MP3 format on 9/16. Almost like a flashback, this piece of music sets the mood for what is to follow.

The recording was created using an Apple G4 iBook, a Roland JV-35 synth. Software was Apple's GarageBand. The strings are from the GarageBand orchestral sound font package, the piano is from the general GB sondfont library. No loops were used.

Posted by jdwarrick at 8:52 PM

This was the first piece written of the four, and it sort of magically appeared. I knew early on that this was going to be about Mary, and the imagery was intense, I could almost see her standing, literally, in a doorway looking back to her life as it was, and forward to her life with Joseph and the baby Jesus.

This piece looks at that exact moment in Mary's life when she realized that there was no turning back, that her life as she had known it was over. My feeling was that this occurred at the end of autumn, and that she was quite pregnant at the time and feeling the discomfort, fatigue and anxiety experienced by so many women in their last weeks before delivery.

The recording was made on the evening of July 26, 2006 using an Apple G4 iBook and Roland JV-35 synth. Software was Apple's GarageBand. The strings, brass and woodwinds are from the GarageBand orchestral sound font package, and drums come from the general GB sound font library. No loops were used.
Posted by jdwarrick at 8:46 PM

Email ThisBlogThis!Share to TwitterShare to FacebookShare to Pinterest
3. The Road To Jersusalem (3:21) $0.99 MP3 (Buy/Download)

This started out as a driving piece with the string work, bass and drums. I knew we were going somewhere but, for the longest time, thought it was Egypt. That made sense because of the middle section which has a sort of caravan feel to it. But as work progressed on the piece it became obvious that the destination was not going to be Egypt. This needed to be a middle track -- so, with a pregnant Mary on either side, an Egypt story would not make sense. But work continued on the track as did my reflection. Eventually it became clear that the journey was from (not, "to" as the title indicates) Jerusalem, as Mary and Joseph make their way to Bethlehem for the census and the birth of their first child.

This piece was recorded between July 30th and early August 2006, with post production completed around August 23. The piece was written pretty much in the order that the movements appear in the song, although there was some overlap. The guitar bit in the last part of the main theme arrived very late and yes, was recorded live - although in post production a few corrections were made. There is also an entire segment that got cut, and will likely show up somewhere in the near future. It's a very new age-jazzy bit that was a lot of fun to do but which really worked against the mood and tone of the piece.

The recording was done using an Apple G4 iBook, a Roland JV-35 synth. Software was Apple's GarageBand, with some enhancement using BIAS PEAK. The strings and woodwinds are from the GarageBand orchestral sound font package, and drums come from the general GB sound font library. No loops were used.
Posted by jdwarrick at 8:46 PM

I had some reservations about placement of this track in the story. There is no Biblical reference to Mary ever leaving the stable once they arrive in Jerusalem and prior to her giving birth. But I stand by the arrangement of the four tracks, and remind you that for the most part the enhanced version of the Birth story comes from my imagination.

The shortest piece of the four, this one was and is the most visual for me. The image of the young Mary, making her way to the water edge, filled with anxiety and fear and a moment of uncertainty. Doubt washes over her, baptizing her confusion and bringing into focus a need for external confirmation that the choices she made were correct. I checked, and there was a body of water that she might have made her way to. The water, the dog barking as - what? - she, or perhaps someone else passes by? Her fear was real and terrible to her. And then the storm came and, moving with great difficulty, she made her way back to safety. I suspect there was a friend or servant nearby to help her, perhaps Joseph. From our perspective in time we sometimes forget that this very young girl gave up the life that she knew and moved away from her friends.

This piece was recorded during the evening of July 30, 2006, with post production completed around August 1 or 2. The piece was written pretty much in a single sitting, with some dubbing completed a day or two later.

The recording was created using an Apple G4 iBook, a Roland JV-35 synth. Software was Apple's GarageBand, with some enhancement using BIAS PEAK. The strings and brass are from the GarageBand orchestral sound font package, with everything else coming from the general GB sound font library. No loops were used.
Posted by jdwarrick at 8:45 PM 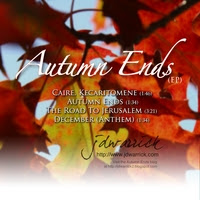 About Autumn Ends:
Marian in scope, these four songs were written for Christmas as a meditation on the Holy Mother, and offer a glimpse of a young woman as she leaves one life behind to say "yes" to God and become the mother to a Messiah.


These four tracks can be each considered a piece of one larger movement, and can even be thought of as a loop -- as the final note fades from the last song, the first note can begin again from the first song.

Individual tracks as well as the entire four track EP are availble for download from jdwarrick.com or iTunes for 99 cents per track. A physical CD is available from CD Baby.